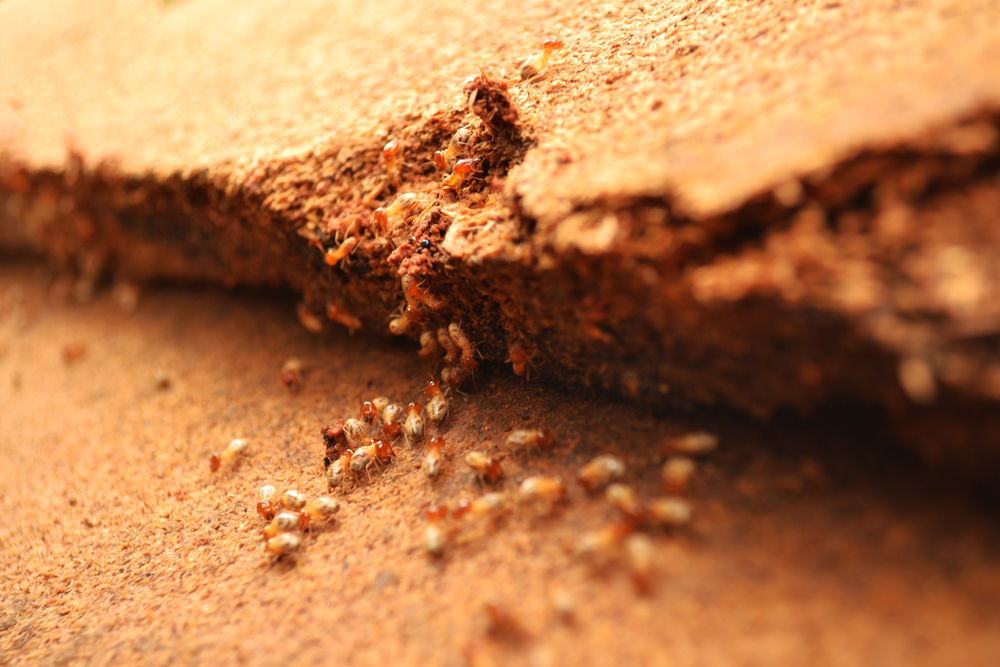 It’s a kind of woodcut insect, which looks like a small white ant that creates enormous disasters in wood. The reason why this happens is due to the fact that it feeds on cellulose which exists in wood. It survives by avoiding light and that is why it mainly builds its colonies and its routes in tunnels inside the wood itself.

In a single termite nest there are:

Workers: They consist about 90% of the society. Their main task is to seek for food and nurture the entire society. Most of the times, they are usually described as the small white worms by not experts.

Soldiers: They protect the society by natural enemies like ants. Their main characteristic is the big size of their head and their intense dark color. They also possess a black pair of hard jaws, which resemble claws, which makes them clearly visible to the naked eye.

King: Its main task is to pollinate the queen initially for the first colony and for all the rest colonies until the end of its life.

Queen: It creates the colony by producing thousands of eggs per day until the number of the insects in the society is high enough.

The kinds of termite, which are usually found in Cyprus, are:

Our island’s temperatures allow their multiplication in an extremely high pace which causes severe damages in all wooden surfaces.

Dealing with this kind of insect requires professional products applied directly to the infected area which is determined by the experienced manager of the staff sent to operate at your facilities. The specific products, used only by professionals, cannot be detected by the insects themselves thus they are easily contaminated by the virus, transmit it to the society and cause as a result the destruction of the entire society.

The Dangers of Termite Infestation

Cyprus has one of the warmest climates and warmest winters in the Mediterranean part of the European Union. The climate is subtropical and semi-arid (in the northeast part of the island), with very mild winters (on the coast) and warm to hot summers.

As a result, the climate of Cyprus provides the perfect conditions in terms of temperature and humidity to its soil for breeding termites. Termites infiltrate homes and businesses at alarming rates causing untold damage. It is a fact that there is great ignorance and devaluation of the seriousness of the damage they cause. Termite problems are increasing to a great extent in Cyprus, especially in buildings without the proper planning for the possibility of such a problem before construction has taken place. The result is an influx of buildings, which makes it easier for underground termites to attack. We have the experience and know-how to design and prevent termites from invading buildings, homes, and other projects which are under construction to avoid future catastrophic termite attacks.

Where does Termite attack?

Termite attacks all kinds of wood making because the main nutrient consumed by termites is cellulose, which is the most common organic ingredient in nature and the most important ingredient in wood. Underground termites prefer moldy rather than healthy wood and wet rather than dry, but no wood is safe from termites, especially when food alternatives are limited. Apart from its use as a building material, wood has many applications in the manufacture of furniture such as tables, chairs, benches, cupboards, pictures, wood paintings, church templates, wood floors, wooden doors, woodworking plants, wood warehouses, etc. However, the multitude of advantages of wood does not counteract its perhaps unique disadvantage. Any kind of wood is affected by insects and fungi that can cause great damage to the wooden structures as well as deteriorate their quality until its destroyed.

Damage to wood by Termites

Termites are insects that live in organized societies in large numbers. They always have a queen who is well protected in the nest and is served by many workers and soldiers. Underground termites eat the interior of the wood, creating clay chambers inside it, leaving the outer surface intact. They are insects that are afraid of light and have a secretive lifestyle. Therefore, termite damage to wood is not perceived from the exterior, but the symptoms of infestation become apparent when the damage is severe, and the wood internally is completely destroyed. There are three types of termites in Cyprus. Dry wood termites, Damp wood termites and Subterranean termites of which are the most common.

Unless we take the necessary measures to deal with termite, termite can pose a serious problem in wood and in cases of timber, it can lead to stability problems. For this reason, it is important to take preventive and therapeutic action to rescue the wood and prevent insects from invading other pieces of wood in the area. The treatment may vary depending on the type of insect that eats wood at home. Therefore, proper maintenance of wood with approved materials gives it longevity. On the other hand, wood that is not properly maintained or not properly processed by the production plant is at greater risk of being infected by wood-eating insects.

Our company OnTarget Pest Control & Cleaning Services, consists of experienced and well-trained staff, who use the appropriate pharmaceutical preparations in the area where the experienced Garage Manager considers it necessary. OnTarget from its first steps has shown its sensitivity especially in the Termite control and treatment area where in many cases the treatment is done and immediately if necessary, replaced with new impregnated timber. These professional preparations are undetectable by the insects themselves. This helps them to be easily infected with the virus and its immediate transmission to society, resulting in its complete destruction.